Already a winner before stepping on the red carpet at the 63rd annual Emmy Awards, Gwyneth Paltrow wows with her Emilio Pucci ensemble. The bare midriff look is a departure from her usually girly gowns but she pulls it off. The intricate beadwork and tulle accents really make this look outstanding. She accessorized with flawless makeup, straight locks, Neil Lane jewelry, and Roger Vivier sandals.

She won the award for Outstanding Guest Actress in a Comedy for her role on “Glee” as the guidance counselor Holy Holiday.

Not many people can [or should] do a bare midriff on the red carpet but Gwynnie pulls it off. 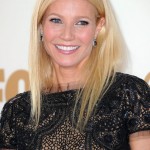 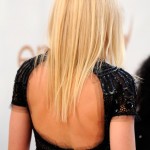 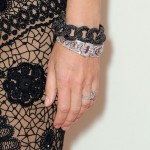 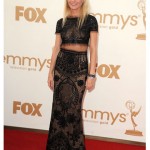 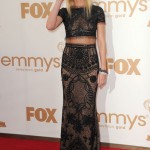 “How I Met Your Mother” star Cobie Smulders looks great in this Alberta Ferretti dress.

The Emmy’s are at a weird time in the season where summer is ending and fall hasn’t yet started. This color blue could be a tough color to pull off for some but Cobie wears this well. The jewelry and clutch choices were great.

I can’t say anything bad about this look.

The Emmy’s red carpet has just started and we already have a hit. Nina Dobrev seriously rocks it in this Resort 2012 Donna Karan Gown.

The “Vampire Diaries” star looks so amazing in this dress. It fits her wonderfully and the color is divine. I like that the jewels are bold but not too much. Her hair is just right.

Everything about this look is a hit. 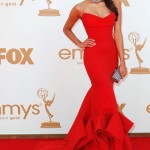 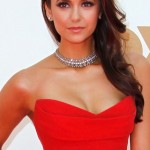 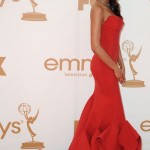 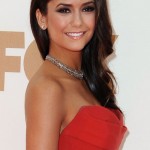 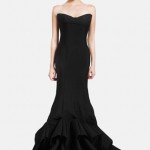 Had to do it. Haute mess alert. VMA version. [i’ll be live updating as the pre-show rolls on]

Up first, new female MC Kreayshawn. I don’t really have too many words. Apparently she has a beef with Rick Ross, idk what the deal is.

Click into it to see the full view. Sneakers and all.

Now I love me some Jersey Shore but we all know their fashion is very….Jersey. Deena from the show looks like a skittle tonight on the VMA black carpet.
A sexy and petite skittle though. At least she kept it classy with the nude Christian Louboutin’s.

Aww….I love Jessie J but I can’t get with this look. Apparently she fell of the stage during a performance and broke her ankle, thus the boot encrusted with Swarovski crystals. I get that…everything else, I’m not understanding. She should give the crutches and leotard back to Lady Gaga.

Miley, Miley, Miley. She can never seem to dress for the season. I guess she didn’t get the memo that it’s August, aka summertime. I don’t mind a long sleeve gown but there is a time and place. Don’t get me started on the all over print either. I know she’s loyal to Roberto Cavalli but come on.

Okay, Katy Perry in Atelier Versace Japanese inspired dress. I see she’s having fun with the event but the hair. Dyed pink? A wig would have been just fine.

Ummmm. Nicki Minaj. Huh? I wonder what three year-old’s toy box she blew up to create this getup? Not feelin it. Not at all.

My second favorite style-icon (after SJP of course) these days might just have to be Anne Hathaway. With outings like this on the regular, I can’t help but have her at the top of my list. Here she is in Alexander McQueen, 2012 Resort at the London premiere of her new movie One Day.

She looks amazing with the soft Marcel waves, clean makeup, and simple pink lip. The white lace is so pretty. The tea length is hard to wear for most women but Anne pulls it off perfectly. It’s not short and it’s not long but can be done if you carry it right. She accessorizes with a few simple bangles and a coveted Alexander McQueen skull clutch. Love it!

Emma Watson who played Hermione Granger in the Harry Potter movies looked amazing at the premieres of the series last installment “Harry Potter and the Deathly Hallows: Part 2”.

The world premiere was Thursday, July 7th in London’s Trafalgar Square. Emma wore a beautiful blue-grey Oscar de la Renta gown with a gathered tulle skirt. The gown is from the Fall 2011 collection. Even though she’ not smiling in this picture, she looks stunning in the dress. I’m sure emotions were running high for all of the cast members. I wish I had an event to wear a ball gown to…

For the NYC premiere Emma chose a Bottega Veneta gown with no less drama than the Oscar gown. The Fall 2011 runway look is a bit more edgy [to go with the New York setting]. The fitting bustier top is a contrast to the flowy amber skirt. Smoky eyes with heavy liner and slicked back hair round out this look.

Check out some other pics for the events below:

Here is the first edition of who wore it better. In this round we have Beyonce vs. Lala Vasquez.

Both ladies are wearing a sequin dress from Tom Ford’s spring/summer 2011 collection.  The body-conscious dress hugs each lady’s curves. Beyonce wore hers down the runway for the debut collection for Tom Ford while Lala posed on the red carpet at the 2011 BET awards. Mrs. Anthony wore black strappy sandals with her dress. Bey’s was styled with black knee-high fishnets and open-toed pumps. I love how Lala’s hair is up in the cute knot, not really into Beyonce’s wild blonde curls.

Not much else to say…tell me what you think!

Diggy Simmons.
Look at Rev. Run’s son Diggy Simmons arrive on the red carpet. His performance of his new single “Copy.Paste” was dope…til he started dancing.

Lloyd.
New album coming out soon…never seen him without a shirt.

Rocsi.
I know it’s hot in LA but what is she wearing??

Kerry Washington.
Loving this neon color! Great silhouette. I would have picked a different shoe though.

Alicia Keys.
New mom Alicia Keys was styled by June Ambrose. Loving the fishtail braid and the black and white Louboutin’s in this look.

Kristen Stewart in Balmain.
We get a rare smile from the ‘Twilight’ princess Kristen Stewart. Usually she’s all dark and awkward but I’m loving her look here. This Spring 2011 Balmain dress is spot-on. We need more of these tough but feminine looks from her.

Selena Gomez in GiambattistaValli.
How cute does Selena look?! This whole outfit hits from head-to-toe. It’s age appropriate and season appropriate. Not too many people wear Giambattista Valli on the red carpet but I approve of this look. I’m sure the boyfriend Justin Bieber approves too. 😉

Trey Songz.
R&B hit-maker Trey Songz hit the red carpet in a leather jacket, ivory scarf, printed tee, & jeans. Not sure who he’s wearing but he is on trend for the upcoming fall season. Leather will be in, especially non-traditional pieces like the blazer Trey has on.

Tyrese.
Okay, I see you Tyrese looking quite dapper. I am feeling this caramel leather aviator jacket. The singer and ‘Transformers’ star sports a white button up and white v-neck tee under the leather jacket. The sneakers don’t disappoint and the rosary beads are a nice touch.

Emma Stone in Bottega Veneta.
Emma Stone is wearing a look from the Fall 2011 runway. The black lace overlay compliments the grey and yellow striped bustier dress. I’m glad that Emma has returned to her red locks (although not her natural color).  The accessories are on point also, the burnt orange Casadei pumps and the orange Bottega Veneta clutch are the perfect compliment to the dress.

Leighton Meester in Balmain.
‘Gossip Girl’ star Leighton Meester is the third person to wear Balmain to this event. (Mila Kunis wore a Balmain skirt) The long-sleeved dress might be hot for the summer LA weather but I do love the pockets. Leighton keeps it fun in this blingy ultra mini.

Now that the 64th annual Cannes Film Festival is over, here is a recap of my favorite looks from the last 6 days of the event. There are less traditional red carpet looks this time to make it more interesting.

Janet Jackson in Haider Ackerman. amfAR’s Cinema Against AIDS Gala.
Janet is spot on for the upcoming fall with the deep green and cabernet colors. I also love that this isn’t a traditional gown and the fit is  perfect.

Kirsten Dunst in Chanel. amfAR’s Cinema Against AIDS Gala.
Kirsten looks precious in this soft pink dress by Chanel. The detail of this dress is amazing.

Uma Thurman in Versace. ‘Midnight in Paris’ premiere.
Loving this look so so much. The white looks amazing on Uma. The thigh high slit is not too much either.
She added emerald green Chopard earrings to really compliment the white dress.

Gotta show the open back!

Bar Refaeli in Roberto Cavalli. ‘The Beaver’ premiere.
Someone sure looks hot! Leo DiCaprio’s ex rocks this hot number by Roberto Cavalli. Even with long sleeves and the dark navy color, she still hits a homerun with this look.

Back cutouts to turn up the heat.