Let me first start by saying that this fashion documentary truly enchanted me. I left the movie theater feeling so full & inspired. It re-energized my love of fashion, it was like fuel to my fashion soul.

“When you have a big stage, you step up. It  asks you to do more.” – Cathy horyn
(on raf Simons as the new creative director for christian Dior)

The fashion movie Dior and I, directed by Frédéric Tcheng, chronicles the appointment of Raf Simons to the creative designer post for the historic French fashion house Christian Dior, through the debut of his first haute couture collection, just 8 weeks later. The documentary starts with the introduction of Raf to the Dior atelier team, the seamstresses that work endless hours creating the beautiful couture creations that walk the runways each season. 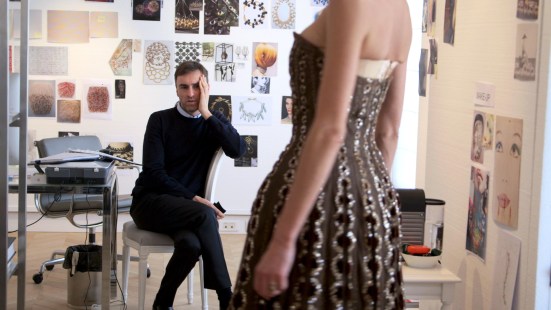 As Raf is introduced to the atelier staff, we meet the women and men who carefully construct these one of a kind garments, including the most tenured seamstress who has been working for Christian Dior for 42 years. The first thing they ask Raf is if he will be working until the last-minute, offering to him their help and expertise as it was his first ever haute couture collection. Raf feels the pressure and expresses his heightened stress level of the shortened timeline to his right hand man & studio director Pieter Mulier.

The challenge for Raf Simons was to create a collection for a house with so many archival fashion codes. He wanted to be radical in his approach to modernize the house. The film was great in its juxtaposition of the design process of Monsieur Christian Dior and now Raf, who was embarking on a similar journey of taking something from the past and re-creating it in a new, romantic light. Much like the way Christian Dior did when he created the “New Look” of the 1940’s and 1950’s, giving women a new way of dressing post-war reminiscent of his mother’s rounded silhouettes. 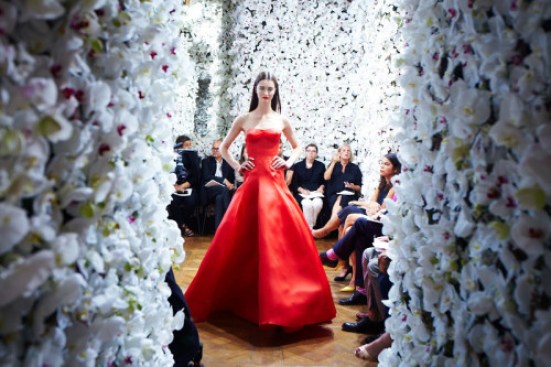 Although Raf is a visual person, he does not sketch himself. He takes pictures of ideas, photographs inspiration and pulls together files that are sent to the team who then uses them to sketch 150-200 looks that are then edited down and selected by Raf. The sketches chosen are then sent to the atelier where the stylists then choose what look they would like to create from scratch, starting with muslin and toile. I loved hearing from a seamstress who showed much excitement to sew a garment with lots of tailoring. And once she heard that it was to be done in velvet fabric, she became even more enthusiastic. That passion for her craft was really beautiful to see.

Other key points in the film included a fitting for the runway show where dresses were expected to be ready to review, yet a delay due to a couture client caused tension between Raf and the team. The world of haute couture is an expensive proposition so business needs must be balanced with the creative side. Another balancing act involved Dior PR bargaining with the often camera-shy Raf for press time in order to get ad space in an important Paris magazine. A designer is not just a designer, but is often the face of the brand and in today’s time must be accessible unlike the designers of Christian Dior’s heyday. 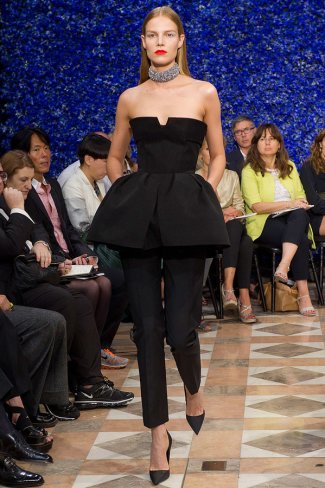 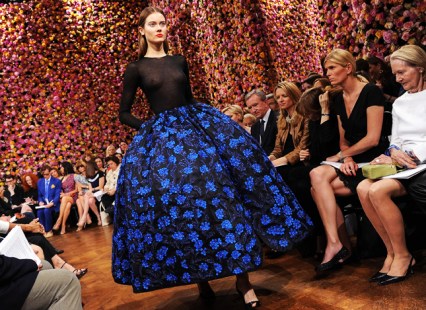 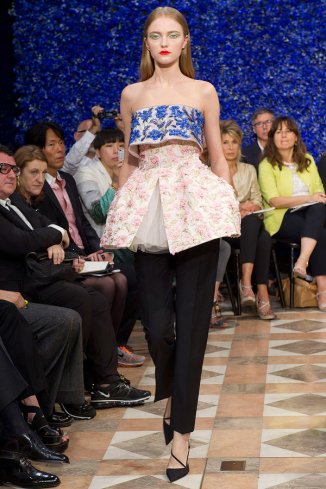 It was great to see how inspiration strikes, as we get to see the moment that Raf came up with the insane idea to create the rooms of an old mansion completely covered in flowers as the gorgeous backdrop to the runway show. Despite challenges of fittings, fabrics, and working with a new team under a tight deadline, the collection came together beautifully as Raf was fêted by many of fashions’ finest including Anna Wintour, Donatella Versace, Alber Elbaz, and Marc Jacobs, as well as Dior darlings like Jennifer Lawrence and Marion Cotillard. The emotion that poured out from Raf Simons at the various points between his introduction at Dior to his catwalk finale bow was refreshing. I identified with him on that level of feeling an emotional connection to your work and just hoping that it will be good, and that people will respond positively.

Getting an inside look into one of fashion’s most historic houses was truly a treat. I encourage everyone to go see the film & let me know your thoughts! 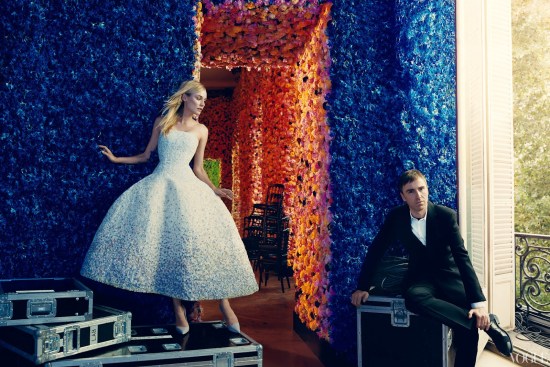 1. Pursue your passion with all abandon. Whether you are front and center or behind-the-scenes making sure all the details come together, do everything with passion. People can see it when it’s genuine and they will respond. Pure passion will take you farther than you ever thought possible.

2. Try to learn a few language, even if it is just conversational. Expanding your horizons by being able to understand a different language is really rewarding and you never know when it may come in handy.

3. Haute couture is the core of fashion. The history of haute couture is so rich, you can never learn enough. (Always be a student!) As the fashion cycle gets faster and faster, the appreciation for handcrafted garments made with such love and care is really something special and indeed a true art form.

Learn more about the movie here.

Watch the trailer below:

Okay, okay. I am officially on the Lupita Nyong’o bandwagon.

I’ll admit that she has looked stunning basically *every* time she has stepped onto a red carpet. I’m never one to get caught up in the hype so I’ve been waiting so sing Lupita’s praises (since ANYONE who is even remotely into fashion has been doing so).

But this green gorgeousness from the BAFTA’s on Sunday, February 16th made my jaw drop. 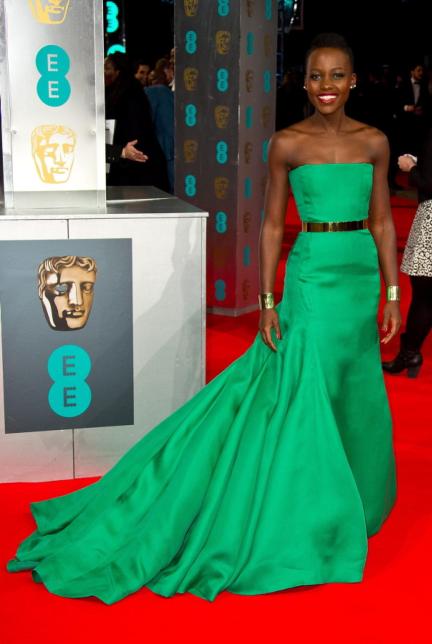 Lupita kills the competition in this Christian Dior couture gown from the Fall 2013 collection.

The train. The flawless fit. The captivating color. #love

Not only is the dress amazing, but her makeup and accessories are perfect. The slim gold belt goes perfectly with the Ana Khouri cuffs that are more superhero chic than wonder woman-esque. She completed the look with a red lip and an emerald smoky eye that I am a huge fan of. 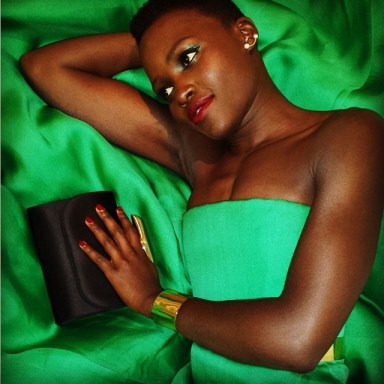 As a rising fashion icon, Lupita Nyong’o continues to win and wow on the red carpet.
Now if only she could take home an award for her supporting role in ’12 Years a Slave’, that would be the icing on the cake!

There were so many great looks that graced the red carpet I just had to show some of the other looks. Check ’em out, tell me what you think. Is there anyone that you loved that I missed? 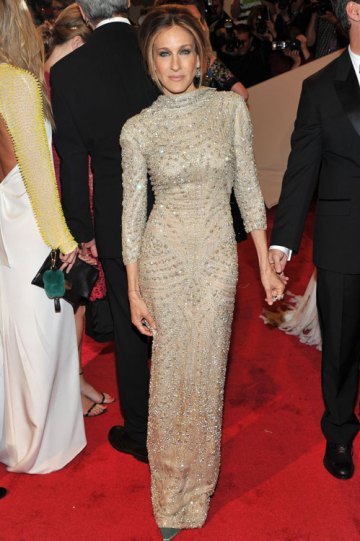 Carmelo Anthony and Lala Vazquez.
No one gave these two any shine but I think they look amazing. I’m kind of obsessed with Carmelo in the all black.
Lala is princess perfect and the colors of the dress and makeup are spot on. 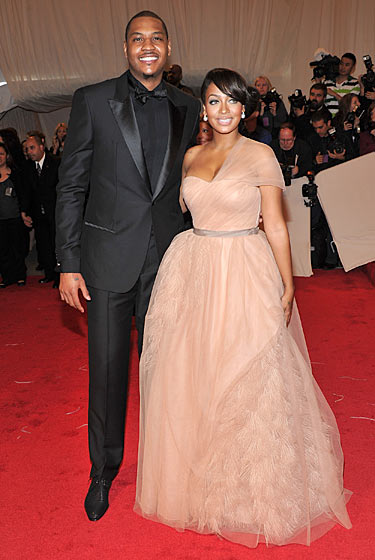 Anna Wintour in Chanel Haute Couture.
A dubs looking oh-so-chic in the runway Chanel. She wears Chanel to this event every year.
This dress isn’t for everyone but I think she makes it cool. 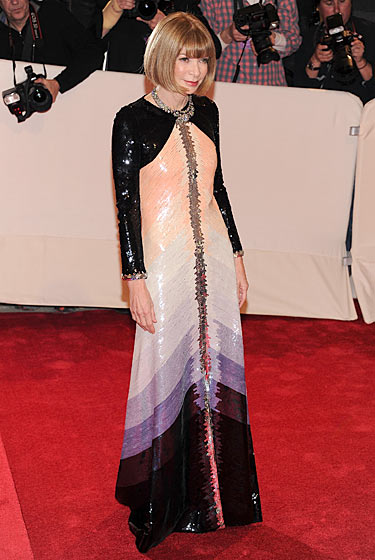 Mary-Kate Olsen in vintage Christian Dior.
MK is giving a totally different look than the rest of the attendees. This vintage Dior is spot-on bohemian which is the hot trend for spring/summer. I love the red dress paired with the green jewelry and the smoky eye she’s wearing is killer. 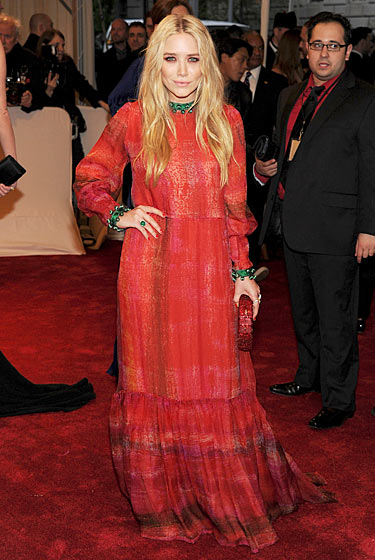 Jennifer Hudson in Vera Wang.
Mrs. Jennifer Hudson looks amazing in this gown. I’ve been loving her fashion choices as of late.
I had to add the picture of her with the designer of her dress, the talented Vera Wang looking great in that chartreuse color. 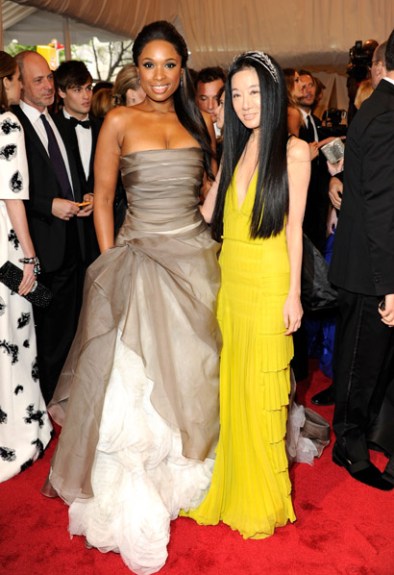 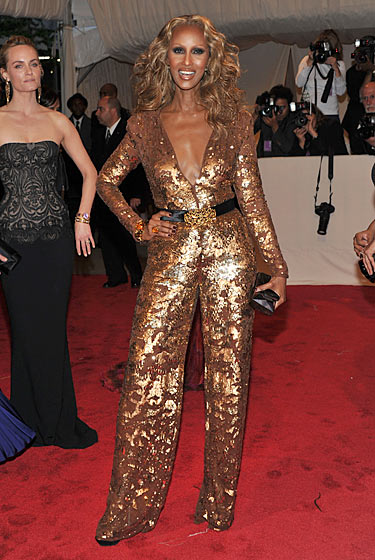 Tory Burch and Kanye West.
Kind of the odd couple, no? Apparently Tory Burch is launching a menswear line and got Kanye to wear a suit from the collection. I never would have picked these two as friends. What do you think of Tory and Yeezy?? 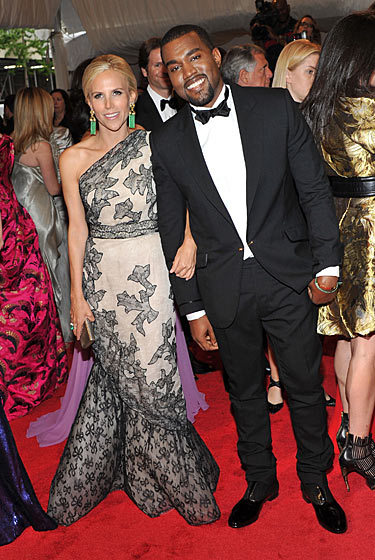 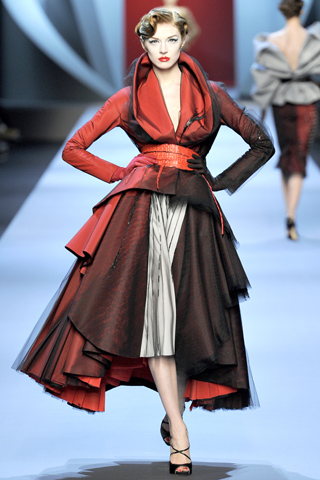 John Galliano presented a beautiful collection for the house of Dior. He was inspired by René Gruau who did illustrations for Dior in the forties and fifties, the heyday of couture. Galliano credits Gruau as being the one who ‘captured Dior’s style and spirit better than any other because he understood his long-term friend… for me a Gruau sketch captures the energy, the sophistication and daring of Dior, and equally is testimony to an enduring friendship.’

The familiar Dior silhouettes were present in forms that displayed great technical ability. Gruau’s illustrations were duplicated on the fabric and also with embroidery. The light and dark shadows played off each other to create a pleasing effect to the eye. The draping effects used in the various tops and dresses communicated a sense of fierce elegance. I’m loving the layers of tulle that create the voluminous skirts. It will be exciting to see who will wear looks from this runway collection. I’m sure Dita Von Teese will be one of the first to attend an event wearing one of these wonderful creations. Maybe we will see one of the gowns at the Oscars. *fingers crossed* 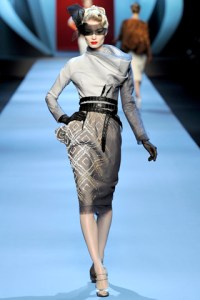 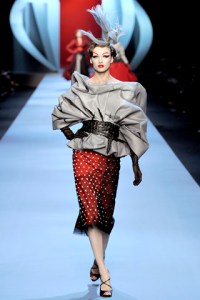 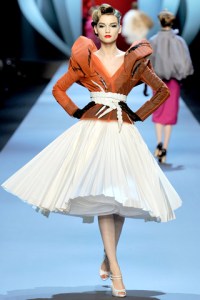 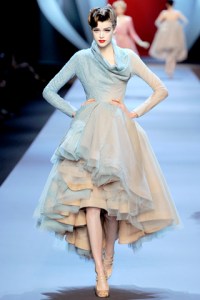 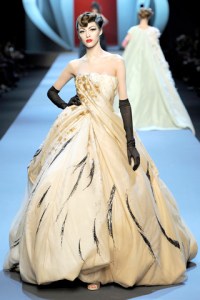