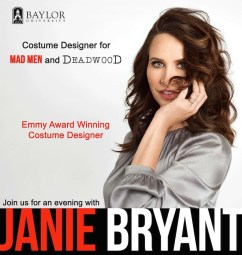 When my former professor at Baylor University posted on Facebook that the costume designer for Mad Men would be coming to the school for a visit, I just knew I had to be there. Last Thursday night, one of my college friends and I hopped in the car after work for a road trip to our old stomping grounds – Waco, Texas – for what would be an enlightening and encouraging evening. Hearing from Janie Bryant, whose resume of work is amazing, was such a blessing. Her work on AMC’s ‘Mad Men’ and HBO’s ‘Deadwood’ (for which she won an Emmy) is truly inspiring.

Janie walked us through her early beginnings, from growing up in a small town in Tennessee, to her taking her tuition money for Georgia State from her dad and using it instead for art school to get a degree in fashion design. She touched on her fabulous 4 months in Paris after graduating, that is until her dad called her back to the states to get a “real job” at Macy’s so she could find a husband. She responded by moving to New York to follow her design dreams! 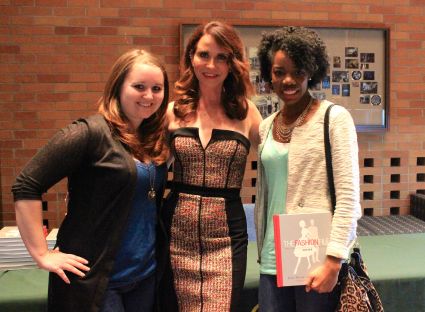 my friend since Baylor – Ashley, Janie Bryant, & I.

Now I could easily write a book with all of the great information Janie shared (I was furiously typing notes in my Evernote app) but I’ll recap some highlights and favorite points:

“People don’t always realize how hard it (film making) is, but it’s not without reward.”

“The early years were so difficult but was such an investment in my career.”

“I think mustard is such an ugly color…but I love it.”

I really could go on and on with more details (there’s so much more!) but this comment will stick with me the most as I’m starting to take risks in my own life by starting my styling + consulting business and this blog.

“They can’t say no forever. It’s your own responsibility to have your own experience & create your own path.”

Thank you Janie Bryant for sharing your experiences and words of wisdom.