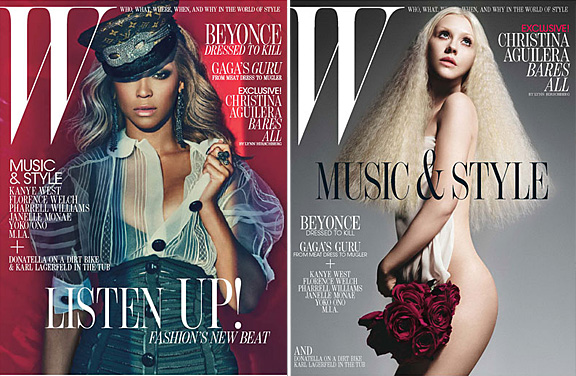 Check out the double cover for the July issue of W. The magazine taps Beyonce and Christina Aguilera as the cover girls for this month’s annual “Music & Style” issue. Beyonce, who was styled by Alex white, wears Louis Vuitton well. I definitely love the monogram hat. Ricardo Tisci silk bra, Lorraine Schwartz earrings, and a David Yurman ring complete the look. Christina wanted to go for a more demure route, not sure how naked achieves that but…okay. She was styled by Giovanna Battaglia with hair done by Luigi Murenu for John Frieda, and makeup by Tom Pecheux for Estée Lauder.

Both ladies are gearing up for a comeback, with Beyonce’s new album due out soon (already leaked, google it) and with Christina hopefully returning to grace as a coach on the hit NBC television show The Voice. Which cover do you like better? Let me know in the comments!

More pictures from the story at MTV Style and the full articles here and here.